It started last autumn when Alyssa Chadow, a teacher at the California School for the Blind (CSB), had the idea of doing a fundraiser. With more than 85 students, CSB educates children from different backgrounds who suffer from multiple disabilities in addition to blindness. The students of CSB are similar to our students in Israel, which is why Alyssa ended up choosing Keren Or for their fundraiser. 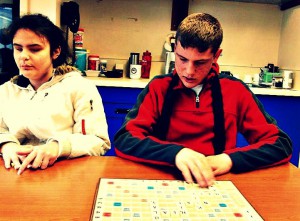 Alyssa decided to dedicate the month of February to a fundraising Game-A-Thon. She suggested a pledge of fifty cents per game, and allowed sponsors to give more. During the month, 22 sponsored games were played by the high school students, raising $79 for Keren Or. Alyssa said this experience began to “bring out the best in people.” She observed the genuine interest the project elicited, not only from her students but from the community around her as well. One student was so proud of what they had done for Keren Or that he became their PR person and would ask Alyssa every day how much money they had earned!

Alyssa believes it is meaningful for her students to help other students, know they are not alone and that there are others around the world going through the same things they are. Some of these children come from schools where they were often one of the only blind or mentally disabled persons in their school. Now they are around others every day who share their unique abilities and disabilities and learn from role models such as Alyssa, who is visually impaired herself.

Alyssa says she teaches her class with “an iron hand” and uses some “tough love” from time to time. She believes the students could not survive on their own otherwise. She has become an inspiring example to them, especially to the ones who say to her, “I can’t do this,” to which she immediately answers, “Yes, you can, and I am going to show you how.” Alyssa teaches these children how to do things for themselves through tasks such as learning how to use a stapler, tying their shoes, and finding the bathroom on their own. Not only does Alyssa teach her students their daily lessons; she implements her belief that teaching does not stop with the classroom. “This care is expensive and is “difficult, and not for the faint-hearted. You need to come in with a level of commitment or you will burn out,” she says.

Alyssa adds that it is her dream to one day visit and volunteer at the Keren Or Center in Jerusalem. Alyssa believes that Keren Or is a unique place, and hopes to make her Game-A-Thon a tradition in her classroom every year around Tu b’Shvat, the time of tree planting and growth. “Fundraising strengthens the roots that will help the tree of Keren Or grow and flourish.”

Mission – Keren Or aims to provide education and rehabilitation programs for children who are blind with multiple disabilities. It is the only center of its kind in the world under Jewish auspices devoted exclusively to this population. Keren Or aims to limit the economic burden on families and relies on funds from the state, local municipalities, and generous donors. Keren Or’s facilities, dedicated staff, and individualized therapy programs allow each student to reach his or her maximum potential.