The Holocaust Stamps Project is a community service learning (CSL) initiative, teaching history and tolerance one postage stamp at a time. The new school year 2015-2016 marks the beginning of the 7th year that the FRCS school community has been working towards collecting 11 million postage stamps.  Every stamp that the students touch brings them one step closer to understanding the immediate impact and long term effects of the intolerance and incomprehensible evil acts of the Third Reich during World War II. 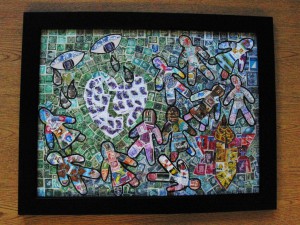 It would be a wonderful mitzvah project to work on the Holocaust Stamps Project which began in 2009 and has, as its goal, the teaching Holocaust history and the vital importance of tolerance for differences. 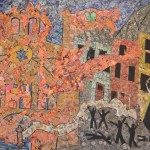 KRISTALLNACHT- The Night of Broken Glass 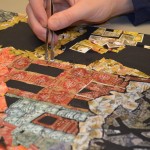 Student works on collage (above).

The stamps should be trimmed to just outside the perforations before mailing to The Holocaust Stamps Project, Foxborough Regional Charter School, 131 Central Street, Foxboro, MA 02035. This makes them cheaper to mail, and saves time when volunteers at the school are preparing to add them to the total.
The Project website includes detailed information about the 18 postage stamps collages that students in middle and high school are creating, using thousands of the donated stamps to share what they have learned about the facts, impact, and long term effects of the Holocaust. There are lots of photos and numerous links to articles that have been written about the project. 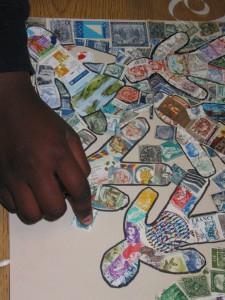 As of July 31, 2013, 3,002,897 stamps had been collected, with the ambitious goal of collecting 11 million stamps, one to honor the memory of every man, woman, and child who was a victim of the intolerance and evil of the Third Reich.
A public venue is being sought for permanent public Holocaust Stamps Project installation which will include all 18 of the students’ stamps collages, and a custom-designed,  acrylic sculpture which will house all 11 million stamps, as a way to present a visual statement of the magnitude of as many lives being taken.