NATIONAL CALL FOR NOMINATIONS SEEKING 10 U.S. TEEN LEADERS TO RECEIVE $36,000 EACH FOR VOLUNTEER SERVICE PROJECTS THAT BETTER THE WORLD

Know a Socially Conscious Jewish Teen Who is Creating Change Locally or Globally?

SAN FRANCISCO, October 2, 2013—The Helen Diller Family Foundation is now accepting nominations for the 2014 Diller Teen Tikkun Olam Awards, an awards program that recognizes up to 10 Jewish teens with $36,000 each for exceptional leadership and visionary actions that are helping to repair the world.  Up to five teens from California and five from other communities across the country will be acknowledged for their socially-minded volunteer service. Visit www.dillerteenawards.org to begin the nomination process. Deadline for nominations is January 5, 2014.

Past recipients of the Diller Teen Tikkun Olam Awards have created a wide range of projects supporting various causes, including providing clean drinking water to people living in third world countries, teen-based websites that provide tools and resources for youth to pursue their own community service projects, educational nonprofits that help those living with Autism and Alzheimer’s and many more. Video of the 2013 recipients and their projects is available here.

Beyond bolstering national recognition of the teens and their social action projects, the Diller Teen Tikkun Olam Awards have nurtured a growing network of young leaders. Awards alumni, who are already driven to make a difference, have inspired and mobilized a “civic generation” committed to volunteerism. Past recipients have been recognized by some of the world’s foremost institutions and leaders, including the United Nations Foundation, The White House and former president Bill Clinton.

“Today’s teens are tomorrow’s leaders. It is our hope that this award will recognize some outstanding young people who are already helping to repair the world,” said Helen Diller, president of the sponsoring foundation.  “By celebrating Jewish teens committed to social action in innovative ways, we hope to inspire many more young people to follow their example.”

The Jewish Federations of North America (JFNA) and their network of 155 Jewish Federations throughout the country continues to collaborate with the Helen Diller Family Foundation, a supporting foundation of the Jewish Community Federation of San Francisco, the Peninsula, Marin and Sonoma Counties, to inspire and encourage Jewish teen volunteer service nationwide.

“We are thrilled to once more collaborate with and support the Helen Diller Family Foundation as they so generously empower young Jewish philanthropists across the nation seeking to make a real difference in the world,” said Jerry Silverman, president and CEO of JFNA.

Now in its 14th year of giving, the Helen Diller Family Foundation has granted more than $200 million to support education, the arts, medical research and development, leadership training programs for teens, and many other charitable endeavors.

TO NOMINATE: Complete the simple online form at www.dillerteenawards.org
For more information email dillerteenawards@sfjcf.org or call (415) 512-6432. 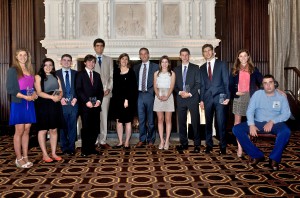