My name is Cindy Singer.

November 6, 1996- a day that my son Dylan was born with familial dysautonomia (FD), one of 19 devastating Jewish Genetic Diseases (JGD’s). It is a day that will forever be remembered as one of the saddest days of our lives.

Along with a host of other life threatening symptoms associated with FD, Dylan is also Autistic and non-verbal. 10% of those afflicted with FD are Autistic. Amazingly, Dylan communicates with an iPad via a special needs voice out-put program called the Proloquo.

As a family we knew that Dylan would have profound health struggles and developmental challenges but with the help of our community or what I like to call “our village” we learned to build a life “one-day-at-a-time”.

Initially our synagogue responded by keeping somewhat of a distance from us. I imagine this happened because everyone had heard of Tay Sachs but no one had heard of FD. And being only human, they did not quite know how to best navigate this new territory. 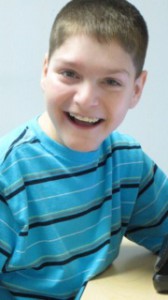 Dylan after he became a bar mitzvah.

However things took a wonderfully positive spin when we decided to enter Dylan in our synagogue preschool. The preschool Director was an amazing support and Dylan attended for 2 years accompanied by his nurse.

As the years passed, managing Dylan’s ongoing health issues and frequent hospitalizations oxygen kept us from actively participating in synagogue life. But as Dylan approached his 13th birthday it occurred to me that I wanted him to become a Bar Mitzvah. There had been so many missed milestones, and I did not want this to become another. The question – how were we going to make it happen”?

We first had to tackle the question of affordability. In spite of health insurance coverage there were still many out-of-pocket medical costs required to take care of Dylan. The additional expenses sadly, but completely prohibited us from being able to maintain membership in a synagogue. But as we soon discovered, our synagogue welcomes members regardless of their ability to pay. And after one confidential conversation with the Executive Director, we were graciously back “in the fold”

In 2010, Dylan became a Bar Mitzvah. Dylan’s grandparents draped him in the Tallis that they had purchased for him in Israel. Jake, the son of very good family friends, along with the help of a wonderful tutor recorded the prayers and the last line of the Torah portion into Dylan’s iPad. Each prayer was assigned a corresponding photo. When it came time to read, Dylan would press the photo on the iPad, and lead us in prayer. With the exception of the last line, my two sisters and I read Dylan’s Torah portion. Dylan led us in the final verse of his Torah Portion and he, in the presence of our beautiful “village”, became a Bar Mitzvah.

There are no words to describethat day. It was a day that continues to stand out as one in which all things were possible- it was magnificent!

I speak publicly and share our story with individuals that include physicians during their hospital “Grand Rounds”.

My hope is that more couples get tested for Jewish Genetic Diseases and are educated about the options they have when trying to get pregnant or are expecting.  For more information about JGD’s and the Victor Center, click here.