Two years ago Andy started a Crocs4Kids campaign when his family friend’s husband fell ill while visiting his family in Africa. When his friend went to be with her dying husband in Sierra Leone, Andy’s family sent her with everything from M&M’s to Tupperware for her community. When she returned from Africa, she said the one thing they had not given her enough of was shoes. Andy found out that too many children do not have any shoes, which puts them at risk for severe diseases and can keep them out of school. 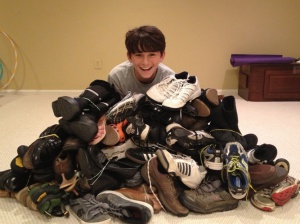 This inspired him to start a collection so when his friend returned to Africa the following year for a ceremony commemorating her husband, she had a generous number of shoes to give to her family and friends. Since then, he continued to gather donations of shoes and money, and he joined forces with Soles 4 Souls to increase his impact where it may be needed most throughout the world.

Andy has collected shoes at school, for birthdays, holiday gifts and various family gatherings. Whenever friends or family clean out a closet, they know to give Andy their shoes. So, the collection started with his Mitzvah project but has remained ongoing. He’s donated several hundred shoes at this point!

Submitted to themitzvahbowl.com by kellym@soles4soles.org with permission from Andy’s mom.