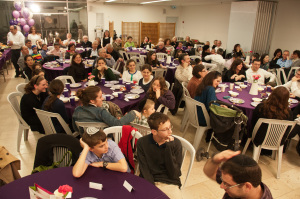 Kari Levine’s Mitzvah Project with Keren Or Jerusalem Center for the
Blind with Multiple Disabilities.

As a teenager, I spent a year living in Israel, where I was able to
volunteer at Keren Or’s Jerusalem Center for the Blind and Disabled.
Every week, I traveled an hour by bus in order to spend time with a
young girl named Aya. It was such a special part of my Israel
experience. Years later, my memories of Aya and my time at Keren Or,
have made me a regular donor to the organization.

Fast forward 20 years, and it was time for my daughter, Tamar, to
celebrate her Bat Mitzvah. Tamar chose to make tactile books for the
children of Keren Or as part of her Mitzvah project, and she worked
tirelessly for weeks to complete them. She also decided to hold her
Bat Mitzvah celebration at the Keren Or campus, inviting not only
family and friends, but the students and staff of Keren Or as well.
It was a beautiful party, made even more special by the presence of
Aya, who still lives in residence at Keren Or. It was so emotional to
see Aya again. She even said she remembered me. She had the same warm
personality I remembered.

My relationship with Keren Or has come full circle, and hopefully one
day Tamar will know the joy of passing down a commitment to Keren Or
to her own children as well.