Inspired by their Torah portion and Bat Mitzvah season, Jack Gordon and Maddie Gerber sought out to create a Mitzvah project that they had never seen done before. Jack’s Torah portion is the story of Noah’s Ark. He was impacted by the similarities of the unkind ways people treated each other in Biblical times and today. Maddie’s Bat Mitzvah will take place around Thanksgiving; a time when we show gratitude and kindness. It was from these shared ideas that they decided to create a game that would get their friends and neighbors involved.

We decided to enlist our good friend Dina Creiger, who founded Choose To Be Nice, a movement to improve the way people interact with one another. A central idea being that we all have a choice in the way we behave toward other people, so let’s consciously choose to be nice. 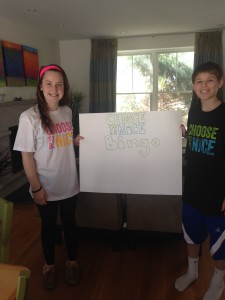 Maddie and Jack created a bingo game with 25 squares, each with a different “nice” task. Tasks include: surprising a relative with a phone call, delivering cookies to the fire or police station, donating gently used toys or clothes, complimenting a classmate and cheering on a teammate. They have also included several “your choice” squares to inspire people to come up with their own ideas on how to be nice.
Maddie and Jack made signs and provided several bingo board pick up and drop off areas at the schools and at the temple. They publicized the game in the temple bulletin and several school newsletters, made posters and personally delivered bingo boards to interested friends and neighbors.

Bingo boards and the rules of play can be found Choose To Be Nice website: www.choosetobenice.com/bingojm. Completed boards can be scanned and emailed right to Jack and Maddie at choosetobenicebingo@gmail.com. Any questions about the game can be emailed to that same address.

For each of six weeks, ending on June 15, one player, chosen at random wins a Choose To Be Nice t-shirt. Player’s first names are also listed on the website.  Jack and Maddie will happily accept completed boards after that date. 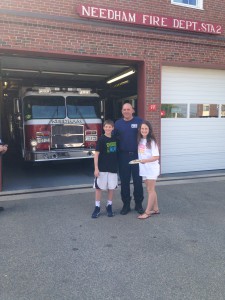 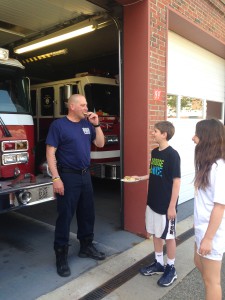 Their goals are for players to cumulatively represent at least 248 nice events; the number of positive commandment in the Torah and to have created a Mitzvah project that can serve as a model for other kids to use in our town or anywhere.