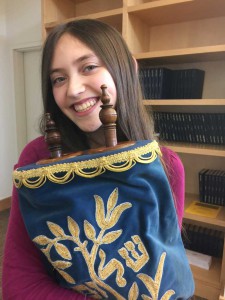 For her mitzvah project, Sophia decided to dedicate the Czech Torah Scroll #1196 donated years ago to her synagogue, Temple Beth El, Newark, Delaware, by Mr. & Mrs. Joshua Kalin.  This scroll, an orphan scroll with an unknown origin whose identity was lost during the Holocaust, now honors the town of Strážnice in the Czech Republic.

Strážnice is a town in the Czech Republic which has a small population of about 6000 people.  There is currently no Jewish community living there today.  However, prior to the Holocaust, Jews were a vital part of the community.

Strážnice also has significance to Sophia’s family.  Her grandfather, Peter Rafaeli, a Holocaust survivor from the former Czechoslovakia, in an Honorary Consul General of the Czech Republic.  Peter’s father-in-law, Otto Fried, was from Strážnice and perished in the Holocaust.  Honoring Strážnice is a way to recognize Otto Fried, his family and the Jewish community of Strážnice who perished.  Recently, Sophia’s family travelled to Strážnice to learn more about the town and its history. They shared all of their photos and stories with Sophia about their travels.
The scroll itself is not kosher and cannot be read from during religious services; however, it is on display in a case outside of the sanctuary at Temple Beth El.  Sophia wishes to keep the legacy of Strážnice and its people alive through educating all generations about the Shoah/Holocaust. With the encouragement of her congregation and Rabbi Micah-Becker Klein, she created a brochure for this purpose which is now available for visitors to her synagogue.

After the Holocaust, The Memorial Scrolls Trust distributed 1564 scrolls throughout the world.  They were brought to Westminster Synagogue in London from Prague in 1964.  Each scroll was carefully analyzed and records were made of it’s condition and origin, if known.  The scrolls are permanently loaned to Jewish congregations across the world with many residing in the U.S.