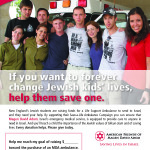 In 2002, a member of Congregation Beth El in Newton, MA, had an idea:
have Jewish ‘kids’ learn about the power of tsadakah and the Jewish concept about saving lives. He (Harry Bloom) asked the representative of American Friends of Magen David Adom [who had just finished a presentation on Magen David Adom (MDA) & how it saves lives of anyone, anytime, anywhere in Israel who needs emergency medical care] how much an MDA ambulance cost. When he was given the figure, and asked when he wanted to donate one, he responded that he didn’t want to donate it — he wanted Jewish students to raise tsadakah and donate the ambulance with it. And thus it happened, in a relatively short span of 5 months, that not one but two MDA ambulances were shipped to Israel – donated by the Jewish Students of Greater Boston. ‘Their’ ambulances showed what the power of tsadakah can do to save lives. 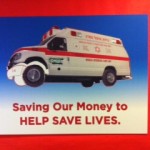 And now we think time to do the New England Jewish Students Save-A-Life Ambulance Project again – with a the next generation of Jewish ‘kids’ – this time giving kids in all of New England the opportunity to l earn about the power of tsadakah and saving lives in Israel. The amount now needed for one ambulance may seem daunting ($100,000), but back in 2002, the ‘kids’ raised $120,000, enough then for 2 ambulances. Can kids do it now? We certainly think so.

Is every tsadakah, no matter the amount, priceless? Yes, because saving a life is priceless.